The Red Guard is a Mobile Trap that will kill the thief on contact. It moves back and forth along a player-determined horizontal or vertical path, which must be at least 3 blocks long. It will slow down towards the end of its path, before changing direction. It can also move through terrain. Keep in mind that its back spikes and hands are not part of the hitbox.

The Gravity Switch was introduced in Update 2.4. It is technically not a trap, as it deals no damage and cannot be upgraded, like Platforms. However, in the King Of Thieves game, they call it as a trap. When a player comes in contact with it, gravity is reversed. After being activated, it can not be reactivated again for the duration of the current attempt. 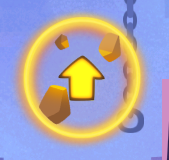 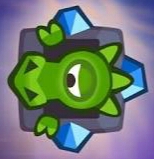 The Roaster is a stationary trap introduced in update 2.24. It is an unknown monster trapped in a cage. When you are touching walls or floor of the dungeon, an orange circle grows around you unless you jump or drop down. If the circle is full, it causes harm, and like all the other traps, sends you back to the door.

The Bloodhound (AKA "Chainsaw") is a Mobile Trap in the form of a "moving chainsaw" that was introduced with update 2.28 on August 6th, 2018. It can be placed on surfaces or within walls (but doesn't then). When the player touches the surface where the Bloodhound is, the trap moves with a short delay, but very quickly towards the player and stops at the end of the surface. It doesn't cross gaps. Even though it's a saw, the Bloodhound has a larger hitbox than the Blade which makes typical "saw jumps" impossible.

There is a bug where the hitbox extends past the bottom of the trap when it being introduced, the bug was later fixed in the later update.

Retrieved from "https://king-of-thieves.fandom.com/wiki/Traps?oldid=9456"
Community content is available under CC-BY-SA unless otherwise noted.