Skulls are items left behind by raiders attacking your base. They can be collected in exchange for Gold, and your base can hold an infinite number of skulls. Without upgrading Skull Gold Bonus, a Castle Upgrade, they give 50 gold per skull, and at max they give 680 gold per skull.

Skulls are special because they cannot be stolen and can act as a massive gold sink that cannot be taken from.

Every time a player dies in your dungeon, you get a skull. Skulls tend to appear where the player died, which can serve to show where attackers are having the most trouble.

When watching a replay, only the most recent 10 runs are shown, which equals to 9 or 10 skulls showing up on the replay.

The Potion Gang of Thieves will not give extra skulls when used, and the skull generated when all thieves die appears to be where the last thief died.

Skulling is the practice of designing an extremely hard dungeon and placing large Gems in the Totem, particularly at lower levels. By doing this, many raiders will continue trying to reach the totem for the 5% chance of stealing a large gem, and leave many skulls in the process. A skuller would not collect the skulls (so raiders that do reach the chest will not steal much gold) until it is needed, meaning that the skull gold is 100% protected from thieves.

Alternatively, skulling may refer to people who intentionally die hundreds, or even thousands of times while raiding to gift the defender with huge amounts of gold, which will often fill their gold to 500k. 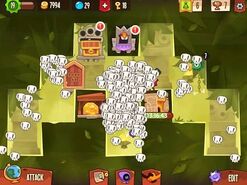 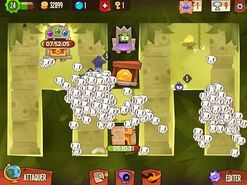 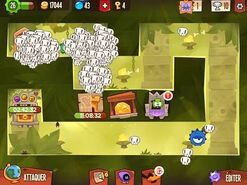 Add a photo to this gallery
Retrieved from "https://king-of-thieves.fandom.com/wiki/Skulls?oldid=7186"
Community content is available under CC-BY-SA unless otherwise noted.