The Red Guard is a movable Trap that can move through terrain and kill the thief upon contact. The Red Guardian moves back and forth in a vertical or horizontal straight line at least 4 blocks long. Along its path, its velocity changes from 0 to top speed, accelerating until it reaches about the middle point of the path and then decelerates until stops in the end point. The longer the path, the longer it takes for the Red Guardian to reach maximum speed. 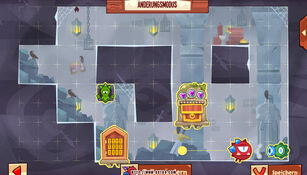 Retrieved from "https://king-of-thieves.fandom.com/wiki/Red_Guardian?oldid=9356"
Community content is available under CC-BY-SA unless otherwise noted.