Experience is a game mechanism responsible for the player's level. Through collecting experience, the player can level up.

By collecting enough experience (shown in the upper left corner) the player can level up. This causes the player to receive keys equal to their maximum key capacity and 5 orbs. 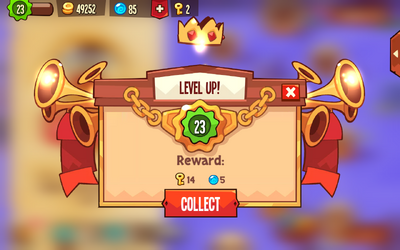 The level of the player dictates the level of the players found in matchmaking. In general, the game will match the player with people of the same level. However, once the player reaches level 45, they are placed in the same pool as all players level 45 and above, meaning it is possible for a level 45 player to be attacked by a level 500 player. This consequently means that it is important to prepare for level 45, since the majority of players will have level 5 foreseer Thrones and a lot of skill in the game.

The level of the player also controls the size of Gems a player can place in the Totem. (include numbers)

The amount of experience needed to level up appears to scale linearly, though confirmation is needed for this.

Experience can be obtained in the following ways:

Retrieved from "https://king-of-thieves.fandom.com/wiki/Experience?oldid=7698"
Community content is available under CC-BY-SA unless otherwise noted.