The Blade (a.k.a. Saw) is a Stationary Trap that kills the thief upon contact. Although there is a Saw spin animation, its hit box doesn't change and doesn't include the teeth.

The Blade is known for being the strongest solo trap, due to the various interactions it can have with the terrain which forces the player to perform various movements to avoid it.

The Blade can be used in a lot of situations to force the thief to perform a specific jump to overcome it. Below, there is a list of tricks that can be used on designing a trap placement in a dungeon (or avoid it when raiding). The fsorb user, from king of thieves forums , made an image scheme compilation that will be reused here.

In this technique, the player must jump from about a square and a half from the wall, quick jump again and as soon as the thief touches the wall beside the Blade, do a perfect timed jump off that wall. To make this last jump easier, the player can use the piano tap technique repeatedly after the first jump to increase the chances on tap at the right time.

Alternatively, the player may go to the wall, jump, and jump again once they have reached the max height. 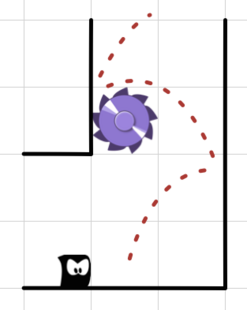 Max Jump
Add a photo to this gallery

This technique was introduced after the physics changes made in the 2.1 update. The thief must jump at the exactly corner of a platform and quick jump again to overcome the blade. This jump has two variations: in the first one, the Blade is placed in the corner of a "L-shaped path", forcing the thief to do a jump off wall and hit the ceiling to change the jump arch and reach the corner at an exact spot that would enable a second jump over the Blade; in the second one, the Blade is placed in the corner of a pit in a straight line path, forcing the thief to jump off from a specific position from the adjacent platform and hit the exact spot on the corner. This can only be achieved if the thief has a specific speed before jump, making it one of the hardest jumps to perform flawlessly, since its execution is dungeon dependent. 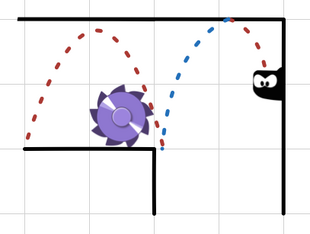 Blade Super Jump
Add a photo to this gallery

Placing a Blade on a corner, 1 blocks above the ground level generates a dead end. It's useful to force a thief to choose another path in a multiple path dungeon. But, since a trap is disabled after 7 deaths, if the Blade is low level, a player can intentionally die seven times to it and then use the "safer" path to reach the Totem. 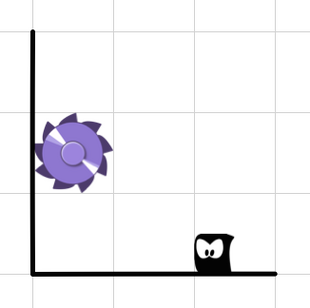 Dead End
Add a photo to this gallery

The Blade is placed at the end of a 3 blocks high pit that must be exit from one side. The thief must jump at the right spot of the corner over the blade to be able to leave the pit. In this jump, the continuous Piano Tap technique can be used to increase the chances of getting the last jump right. If the thief jumps too high, he will miss the corner and head towards the wall on the other side, forcing him to come back to the bottom of the pit for a retry. 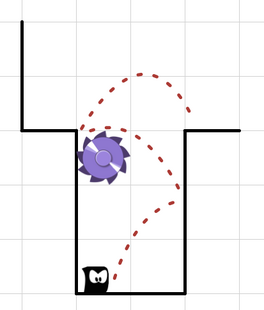 Perfect Blade Pit Jump
Add a photo to this gallery

Placing a Blade in a descendant pathway can force the thief to make a falling star jump. There are two variations to this jump: One of them is shown in the image, and the other is obtained by placing the saw one tile down. 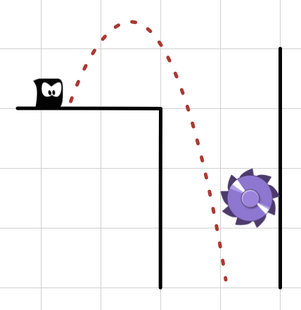 Falling Star Jump
Add a photo to this gallery

The Blade must be placed in the top of a corner over or bellow the chest. To force the use of this technique instead of the Blade "Super" Jump, a player can use a Seeker Bird to avoid space to perform the corner-ceiling jump. If the thief misses the chest hitbox by any chance, it will result in a certain death, hence the name "Jump of Faith". 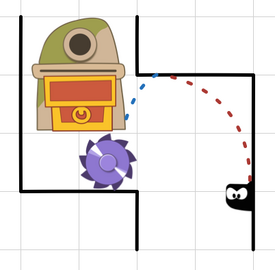 Jump of Faith in a corner

Jump of Faith in a straight path (removed since 2.5)
Add a photo to this gallery

Putting the Blade one block above the ground level in the corner of a "L-shape" path, or at the ground level one block deeper from the corner, will require the use of the Corner Slide. It's simple to perform, but can get hard if there's another Trap in the way. The thief must slide and jump right before hits the ground. There are differences in the two variations and combining them with other Traps may result in different difficulty levels on each. 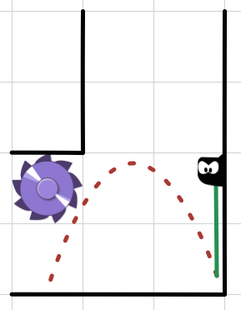 Saw Corner Slide
Add a photo to this gallery

Retrieved from "https://king-of-thieves.fandom.com/wiki/Blade?oldid=8904"
Community content is available under CC-BY-SA unless otherwise noted.